Why get a Tail Wheel endorsement? 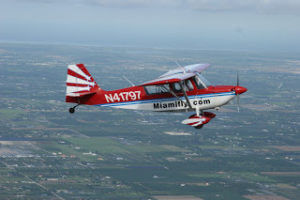 Learning to fly a tailwheel aircraft can be one of the most fun and rewarding activities you will experience in aviation. After just a few hours, you will demonstrate much improved stick and rudder skills.

There is nothing like flying a fabric covered tailwheel aircraft with a stick, just like the pioneers of aviation. You will learn to use the rudder more precisely for coordinated flight, while increasing your awareness of the wind and how it affects the aircraft in the most critical phases of flight. As a Taildragger Pilot, you will have a better understanding and much improved skills for coping with crosswinds during takeoff and landing in any aircraft.

***Even if you don’t plan to fly a taildragger regularly, a few hours of tailwheel training will markedly improve not only your rudder awareness, but also the quality of your landings in nosewheel airplanes. This alone should be incentive enough to add a tailwheel sign-off to your “To Do” list.

What are some of the common problems pilots have transitioning to taildraggers?
The biggest problem can be summed up in three words: rudder, rudder, rudder. Too many pilots have grown accustomed to being reactive with their rudder inputs–waiting for the airplane to do something, then responding–or worse, actually bracing their legs against the rudder pedals, especially during landing. The key in a taildragger is to be proactive with the rudder. To be light, loose, but active on the rudder pedals all the way through the takeoff and all the way through the landing.

How long will it  take?
Pilots want their flight training boiled down to number of hours. After all, hours translate into dollars. But when transitioning to tailwheel flying, the number of landings is actually a better yardstick for measuring one’s “tailwheel readiness.” I’ve found that most pilots are competent to solo somewhere between 30 and 60 landings on paved runways. This usually translates into 6 to 12 hours of dual, most of which is spent in the traffic pattern.